One local musician contacted me to try my germanium fuzz-face. He is a bass player in the local “The Shadows” cover band. They wanted to cover “Stingray” composition but didn’t find a way to get strange broken fuzz sound from the recording. So, I told him that I could try to replicate this sound and if he will like the result he can buy the pedal.

In the mid-60s, when the song was recorded, fuzzy sound just gained first popularity. On the internet, I didn’t find any information on what exact fuzz did Jet Harris use. But he used a very weird baritone guitar (or bass) Fender Bass VI. It is 6 string short scale bass guitar with similar to Fender Jaguar body shape. This bass has tremolo. Haha. 6 string bass with tremolo. 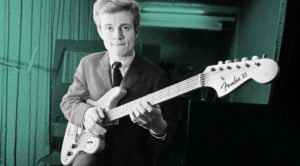 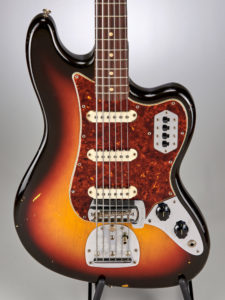 Cover band bass player also had similar Squier guitar. With this guitar and some overdrive/fuzz he already could achieve similar to the record tone. But it was still not what he was looking for.

So he left and I started to search. First, that coming to mind is Maestro Fuzz-Tone. So I made the first prototype with changeable supply voltage and transistor biasing. I have installed sockets for fast transistors change. But all my attempts to recreate the sound were not even close. Then I thought that if it is a British band, Jet Harris could use some prototypes tone-bender circuit. This also didn’t work well. Then I went more clever way and started to watch video-review of different fuzzes. I stopped on zvex fuzz-factory. I was really impressed by this pedal. How many completely different tones can one can get from it?! One of the sounds on the video reminded me fuzzy bass from the record. I looked to schematic and settings on the video and everything become clear. I made a prototype with few trimers for transistor biasing and transistor sockets. And after some time I figured out how to achieve the tone I was searching for.  Here is the final schematic (skipped true bypass, power cap, ground switching):

As you can see that pedal have only 2 controls: output volume and 3d transistor bias adjustment. Bias should be adjusted to have very slight gating effect. A few photos of the beast: 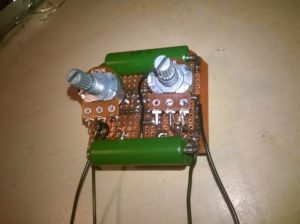 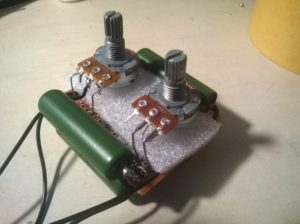 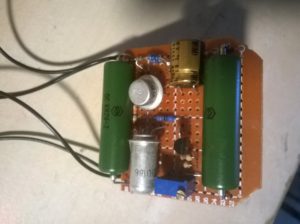 The buyer was very satisfied. Here is a video of him playing Stingray with the pedal through some fancy echo machine: